Hi, I’m Shane Hoover. I turned 17 on January 23rd, and I come from Reading Pennsylvania, in the USA. I arrived in Germany on August 4th, and originally lived in Hettenleidelheim, but I am currently living in Grünstadt. My host family consists of my mother and father, and my little brother, Henri, as well as 2 cats. I decided to come to Germany because I had 3 years of German in school in America, and I wanted to further my German education in an immersive way.

Some of the differences between my school in America and my school here are that in most “High schools” (American Gymnasium) we only have 4 grades (Klassen) from 9th grade to 12th grade. Also, we don’t have “Oberstufe”, we just have students of different ages. Another thing is, here in Germany you have different “Fächer” every day, but in most American High Schools, you have the same “Fach” in the same “Stunden” every day. (For example, if I have “Mathe” in the 2nd Stunde on Monday, I will have Mathe every day in the 2nd Stunde.) We also have 8 “Stunden” every day, but there are many after school activities that you can do, including clubs, sports, music, and public help groups. I’m personally in my schools Chess Club (Schach), and also on the “Quiz Bowl” team, which is like the television programme “Jeopardy”.

There are many good things, and sometimes a few bad things, when it comes to living abroad. Some of the good things are that you get to experience a whole new place, with whole new people and sometimes a whole new culture, you get to make friends from all around the world, and you get to explore the world as a student, which not many people get to do. Of course, some of the bad things include leaving your family and friends behind for a long time, and it can be difficult to learn the language. But exchange years are almost always one of the best times of your life. 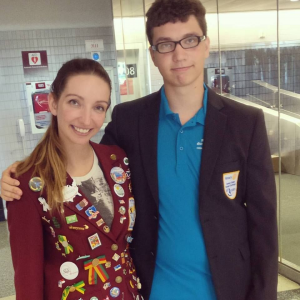